No more Moxy in these trucks 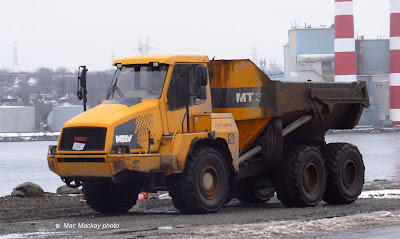 1. A Moxy on level ground puts on a turn of speed. 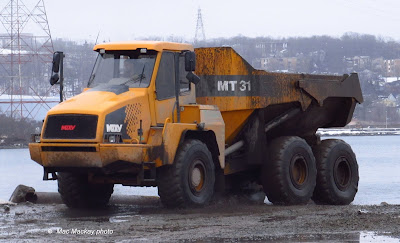 In the checkered history of most truck building companies the owners have usually managed to capitalize on the good name and reputation of the truck to keep it going in good times and bad.
In a bit of a reversal the "new" owners of the Moxy brand have dropped the name in favour of the parent company's moniker.
Dating back to a 1970 prototype articulated dump truck, the Norwegian Moxy Engineering Co established a good reputation for tough and hard working trucks. In 1981 Komatsu acquired 1/3 of the shares and a Norwegian state investment company took the rest. But in 2000 Komatsu withdrew and the company lost a lot of dealers and sales. Moxy then went through another Norwegian, then a British owner before winding up in the hands of Doosan Infracore in 2008. That South Korean equipment builder has now decided that its own name will appear and Moxy will disappear from their product line.
A couple of Moxys are at work in Halifax on a pier construction project, moving dredging spoil. They are model MT31 with a 28 tonne payload capacity, and powered by the Scania 5 cylinder engine (335.3 bhp) and ZF automatic transmission. The 2 foot ground clearance and independent bogeys are ideal for this work. They are running 24 hours a day, 6 days a week